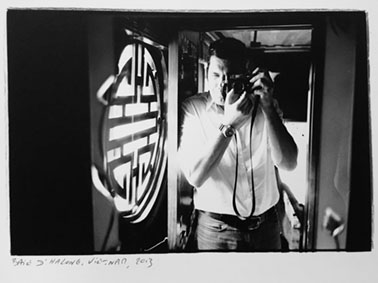 "He remembers those vanished years.
As though looking through a dusty window pane,
the past is something he could see, but not touch.
And everything he sees is blurred and indistinct."
(In the mood for love, Wong Kar-wai)

I took my first photo at the age of 15. I learned how to develop and print my photographs with Dominique G. Boniface who was Ralph Gibson's assistant. For 5 years I photographed only with a 50mm lens and black and white 24x36 film exposed and developed at 400 iso. I set up my own darkroom, exhibited and sold my first prints at 18. At 21, I left for a 2 month trip to China with a Leica M as my only camera, a 50mm lens and 25 rolls of 36 exposure black & white film. After my return and after studying ethnology, I offered my services to various humanitarian aid organisations. I went to India on assignement and my photographs were exhibited in various FNAC galleries in France.
I start my first documentary work with the Emmaus communities founded by the French priest Abbé Pierre. I will develop this work in 7 countries during 10 years. My work is distributed by the photo agency Sygma and my black and white photographs are published in a weekly magazine for the first time in 1999. For the next 20 years, I made photo reports for different NGOs in nearly 30 countries. From 2013 to 2018, I worked as a photojournalist for Agence France Presse and Associated Press. I covered the humanitarian crisis in the Central African Republic, the aftermath of the earthquake in Nepal, the crisis in Ukraine, the migration flows in Greece and Macedonia, the drought in South Sudan and the Paris attacks. My photographs are published mainly in daily newspapers (Le Monde, Libération, The Washington Post, The New York Times, The Wall Street Journal, The Guardian, The Independent...).
In 2019, I am reviving my training as an ethnologist, returning to an authorial approach and focusing my photographic work on the gestures in the work of Men and their relationship to the land, the Earth and the environment. I co-found inTERREviews whose editorial line is defined by environmental and human rights issues.
In 2021, my work "Of grapes & men" received an honorable mention at the International Photography Awards #IPA2021 (New York, USA, 2021).